3 Position Battles to Watch This Summer 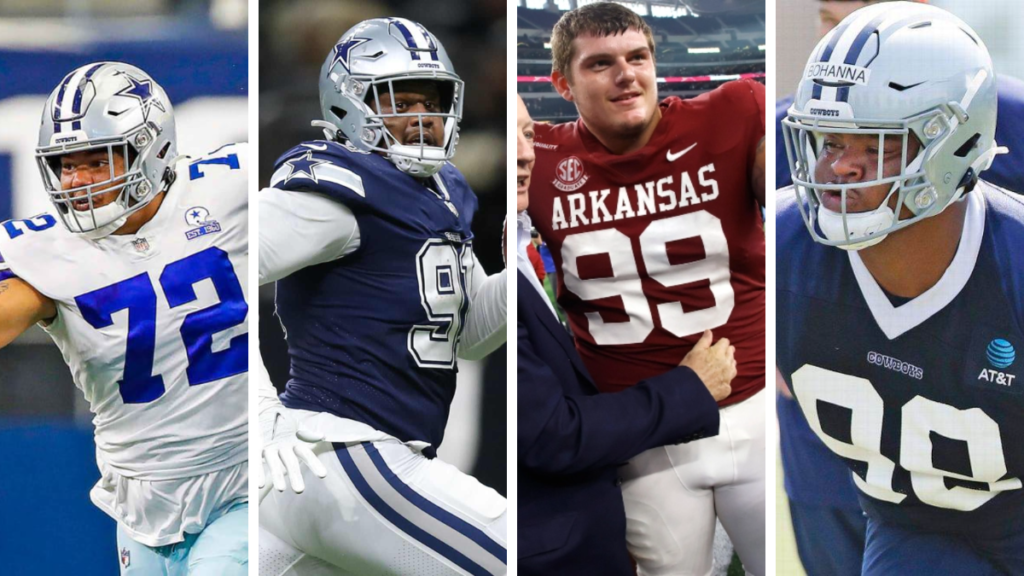 Several players will be fighting for roster spots and starting positions for the Cowboys this summer. Those battles will only intensify with voluntary offseason workouts underway and training camp drawing near.

Tough decisions will be made as Dallas looks to repeat as NFC East champions. Some battles may have a clear winner early. Others will be hotly contested until the end of the preseason. New battles may also emerge if the Cowboys decide to sign a free agent or two.

There are many, but here are three of the most intriguing position battles this offseason:

With CeeDee Lamb and Michael Gallup holding down the top two wide receiver spots, Washington and Tolbert will duke it out for the third.

Both will play their first season as a Cowboy in 2022. Washington arrives after playing four years with the Pittsburgh Steelers, catching 114 passes for 1,629 yards and 11 touchdowns. Tolbert was Dallas’ third-round draft choice after winning 2021 Sun Belt Offensive Player of the Year at South Alabama.

Washington is coming off a disappointing 2021 campaign. However, it’s worth noting his quarterback was the decaying corpse of Ben Rothlisberger, who had the worst Pro Football Focus grade of any quarterback last season. Washington is still a good athlete and a deep-ball threat, averaging 14.3 yards per catch as a Steeler.

Selecting Tolbert in the third round was a perfect choice. He caught 82 passes for 1,474 yards and eight touchdowns with South Alabama last season, ending his college career with two First-team All-Sun Belt selections. Tolbert excels at contested catches and presents quick vertical speed at the top of his routes.

Washington is on a one-year “prove it” deal while Tolbert is the exciting rookie. With no clear frontrunner, the battle between the two should be fun to watch.

With Neville Gallimore and Osa Odighizuwa being the only genuine roster locks at the position, four guys will battle for the remaining spots. Assuming Dallas carries five defensive tackles into the season, Hill, Watkins, Bohanna and Ridgeway will compete for three spots. The former three are veterans, while Ridgeway, a 2022 fifth-round selection out of Arkansas, is the new shiny toy.

Dallas’ investment in Ridgeway by way of a recent draft choice means he’ll likely make the roster. Hill is coming off his best season, and Watkins was the favored DT to line up alongside Odighizuwa after Gallimore suffered a dislocated elbow in the preseason. This leaves Bohanna as the likely casualty, who failed to impress in his rookie season last year.

However, that’s not a sure thing. The Cowboys could keep Bohanna and move on from Hill or Watkins. All four could earn significant playing time in 2022, making for an exciting position battle.

In February, Naggar signed a reserve/futures contract with the Cowboys after spending his rookie season with the New York Jets and Cleveland Browns. He played no games for the Jets and one for the Browns, converting a 37-yard field goal in a week 16 game against the Green Bay Packers. To give him some competition, Dallas brought Garibay in. as an undrafted free agent

Garibay made 15 of his 16 field goal attempts last season for Texas Tech, missing just one of his 50 extra point attempts. His career-long as a Red Raider was from 62 yards out, which happened to be a game-winner against Iowa State. He and Naggar are unproven at the pro level and will be looking for their first real shot on an NFL roster.

This battle will likely last until the day of final roster cuts. Both should receive equal reps in training camp and preseason games. Hopefully, one will be a more consistent kicker than former Cowboy Greg Zuerlein, who missed 13 field goals in two seasons with Dallas.

Nowadays, the average life span of a typical human being is 25,550 days. If you …

Powered by WordPress | Designed by TieLabs
© Copyright 2022, All Rights Reserved